Polish engineers from SENER Poland will take part in the innovative Biomass space mission organized by the European Space Agency. Its goal is to “weigh” the planet’s trees to better understand the environmental carbon cycle and the process of global warming.

Glohe satellite’s main research instrument will be a huge 12-meter radar, whichorego waves will penetrate the crowns of trees and scan the trunks and branches of the. Thanks to the radar data, a global, trojdimensional map of the forestow. Scientists will thus obtainob previously unavailable data on the amount of carbon entering the atmosphere through deforestation and absorbed by regrowing trees.

We rarely think about it, but our lives depend on trees, whichore absorb carbon dioxide and produce oxygen. Unfortunately, scientists estimate that we have already lost half of the forestoin the tropics, whichore once covered the Earth. However, data on the scale of deforestation remains inaccurate, because forest biomass in most areasoin the Earth has not been accurately counted. This is set to change thanks to the Biomass satellite, whichory is being built as part of an ESA program „Earth Explorer”.

This program aims to seek answers to the most important scientific questions about our planet’s environment. Reliable data on changes in forest biomass will enable a better understanding of ongoing climate change. They will be roalso form the basis for UN initiatives to reduce carbon emissions from deforestation in developing countries (REDD+).

Poland, as an ESA member, is also participating in the Biomass mission. SENER Poland, commissioned by OHB Italy, will design, manufacture and test equipment for assembling the satellite’s structure, including equipment for vertical transport, assembly and disassembly of the satellite’s panels, assembly and disassembly of the SAR radar, which is the mainown research instrument, as well as a container for transporting the radar.

It is with radar that the mainowne challenges, because its part is a huge antenna with a diameter of 12 metersow. It is a unique, innovative device thatorego waves will penetrate the crowns of the trees and scan the trunks and branches. Thanks to the radar data, a global, trojdimensional map of the forestow. Scientists will thus obtainob Previously unavailable data on the amount of carbon going into the atmosphere as a result of deforestation and absorbed by regrowing trees. 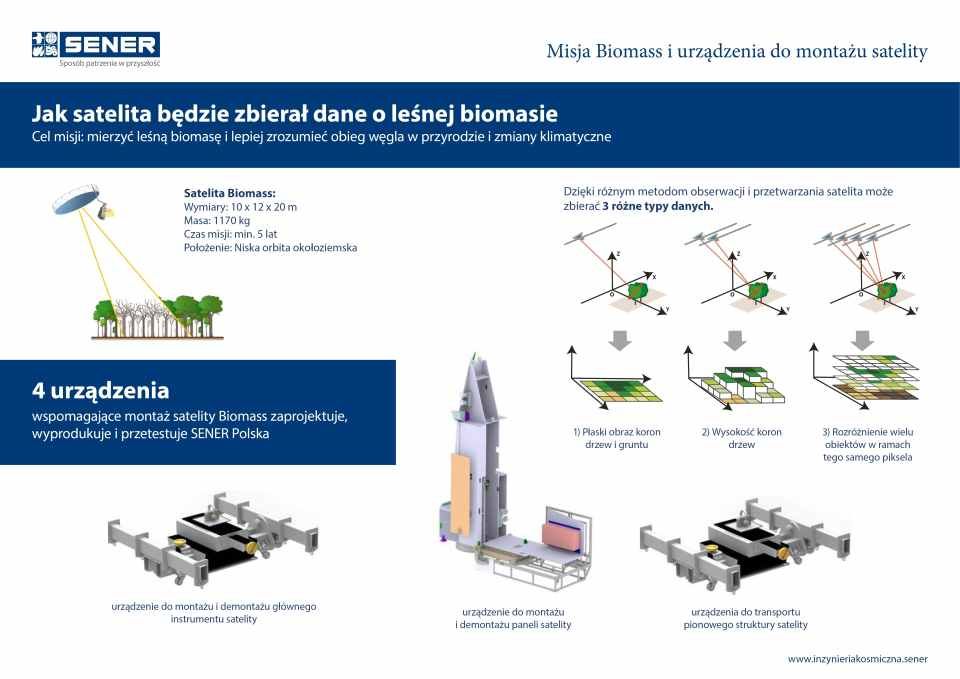 For the first time, measurements will be made from space using synthetic aperture radar (ang. SAR; Synthetic Aperture Radar), whichory uses the P-band and wavelengths of 70 cm. The radar’s exceptional sensitivity will generate 3D maps of the forestoat a resolution of 200 m (1 pixel = 200 m).

It is worth mentioning that in the Biomass mission coohe space agencies from Europe and the US are working together. NASA shares information on the 6-meter antenna installed on the US SMAP satellite, whichora is very similar to the one that the European satellite will be equipped with. Also, in a rare move, ESA plans to purchase a 12-meter antenna from a US company.

Due to ground-based military radars, the Biomass satellite will not map the areaow PoNorth America, Europe and Russia. However, the forests in these areas are relatively thoroughly explored.

The radar installed on the Biomass satellite makes it possible to carry out other research at the same time as the primary mission, for example. archaeological exploration of buildings under the desert surface.

A Vega rocket will be used to launch a satellite into low earth orbit.

The launch is planned for 2021, and the mission is expected to last at least 5 years. The budget allocated for research is 420 million euros.