Organic matter on Ceres may be more abundant than previously thought

Last year, scientists on the Dawn mission announced the detection of organic material on the surface of the dwarf planet Ceres. New analysis of probe data suggests that there may be much more organic matter there than originally thought.

Ceres is a dwarf planet orbiting in the asteroid belt between Mars and Jupiter. This is the largest object in the asteroid belt. Last year, NASA announced the discovery of a compound thereow on carbon-based, whichore are essential components for life. New analysis of data from the Dawn probe indicates that there may be much more organic matter on the surface of Ceres than previously thought.

The findings, published recently in the „Geophysical Research Letters” describe scientists at Brown University. They pose intriguing questions about how these organic substances got to the surface of a dwarf planet. Methods thatohe researchers used may provide a template for handling and analyzing data in future missions.

– What our publication shows, first and foremost, is that you can get really roThe different results depending on the type of organic material with which theyorgo is used to poroThe data are not available for analysis and interpretation. This is important not only for Ceres, but also for the mission, ktore wkrotce will explore asteroids where it can roorganic material may also be found – said research leader Hannah Kaplan.

Organic molecules are the chemical building blocks of life. Their detection on Ceres does not mean that life exists or ever existed there. Non-biological processes can roalso cause the formation of organic molecules. But since life as we know it cannot exist without organic material, scientists are interested in how it is distributed in the Solar System.

The presence of organic material on Ceres raises intriguing possibilities, especially since the dwarf planet is roalso rich in lod, and water is another essential component of life.

The discovery of organic material on Ceres was made using a spectrometer aboard the Dawn probe, whichora flew near the dwarf planet in 2015. By analyzing how sunlight interacts with the surface – looking closely at whichore wavelengths are reflected, and ktore are absorbed – scientists can find out what compounds are present on Ceres. The probe has picked up a signal consistent with organic molecules found in the Ernutet crater region on poNorth poCeres sphere.

To get a preliminary idea of how abundant these compounds might be, the primary complexoł research porohe analysis of spectrometer data from the Dawn probe with laboratory spectra of organic material formed on Earth. Based on this standard, the researchers concluded that 6 to 10 percent of the spectral signature, whichoThe spectral absorption they detected on Ceres can be explained by organic matter.

But the new analysis by the teamoł Kaplan came to a different conclusionow. Instead of relying on Earth’s rocks to interpret the data, the compositeoł zwroct to an extraterrestrial source ofodna: meteoriteow. Someore of them contain organic material thatory is somewhat different from what is normally found on our planet. New research shows that the spectral wspolf the reflection factor of extraterrestrial compoundsoIn organic rodiffer from Earth’s counterpartsow. 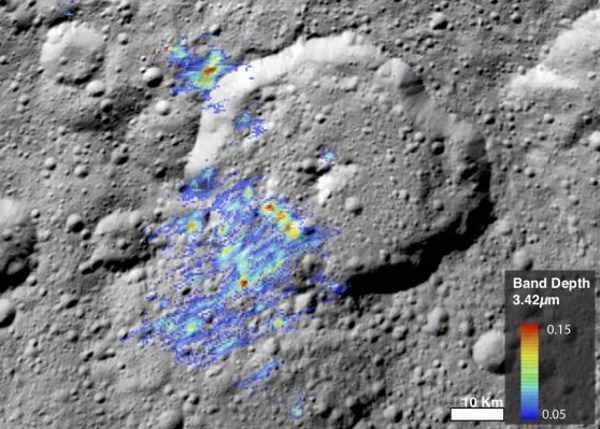 – When we model the data from Ceres with extraterrestrial organic matter, whichore may be a more suitable analog than those on Earth, we need much more organic matter to explain the strength of the spectral absorption theyorą we see on Ceres,” said Kaplan. – We estimate that as much as 40 to 50 percent of the spectral signal we see on Ceres can be explained by organic matter. It is a huge roThe difference in the cfown comparison with previous estimatesow based on terrestrial organic compounds – she added.

If the concentration of compoundsoin organic matter on Ceres is indeed high, many new questions arise about the source of theoThe bottom of this material. There are two competing possibilities. Organic compounds could have been formed on Ceres or could have been delivered to the surface by the impact of an organic-rich comet or asteroid.

If organic compounds were delivered to a dwarf planet, their high concentrations would be more consistent with the impact of a comet than an asteroid. Comets are known to have a much higher intrinsic organic content in porown relation to asteroids. However, the heat from the impact would likely destroy a significant amount of these substances. Scientists say it is unclear whether such abundance can be explained by cometary interaction.

But the second option, which is the formation of a compoundow on Ceres, is also unclear. The detection of organic substances has so far been limited only by small areasoin the poThe northern polkula. Such high concentrations in such small areas require clarification.

– If organic compounds were formed on Ceres, a still unknown mechanism that wouldory is responsible for their accumulation in such quantities in these specific places. It is not clear what the mechanism may be. Ceres is a fascinating object and understanding the history of this dwarf planet and the origin of compoundsoin the organic discovered on it will require future missions, ktore will be able to analyze probki or take them with them to Earth – said Ralph Milliken of Brown University, coorouter of publications.

Scientists hope that their research will help in the design of future space missions, in which theorych probki are to be transported to our planet.